Eric’s Shower Has Never Been Cleaner with Wet & Forget 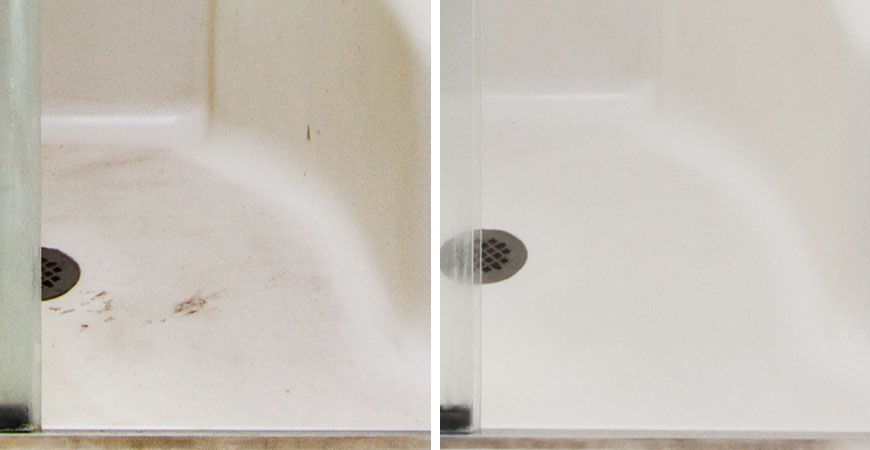 Over time, shower surrounds can turn from a bright white to a dingy, yellow, or brown color. But not when you properly clean your shower!  After discovering Wet & Forget Shower, Eric’s shower has never been cleaner.

Eric was always trying to remove the soap scum in his fiberglass shower surround and opaque glass shower doors. But after using product after product, nothing would fully eliminate the build-up.

“I have tried other “spray and leave” products that haven’t seemed to do very much” -Eric M. Normal, IL.

In the past, he used an automatic shower cleaner that hung from the showerhead. It would then spray foam with a push of a button. Although he liked the convenience of just pushing a button, it was not effective at cleaning.

What used to be a never-ending battle finally ended when Eric saw a Wet & Forget Shower Facebook ad.

The ad had lots of comments about how well it works, so Eric decided to investigate further. He liked that the product had a light, vanilla scent. There was not a harsh scent like the other bathroom cleaners.

Plus, it seemed so easy to use, with little to no extra work!

“The scent is nice. It doesn’t have that strong, chemical smell like other cleaners” -Eric M. 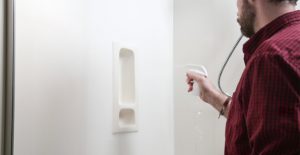 “I like that I just have to spray it on, and it prolongs the time in between cleanings” -Eric M.

Since Eric’s shower had a build-up of scum, it took a few daily applications to fully break up the soap scum.  Now, he only has to apply once a week to keep his shower shining. Eric’s shower not only sparkles but, most importantly, is now easy to keep clean all the time with little effort.

The cleaners he used in the past never came close to eliminating the soap scum build-up. And, the ineffectiveness of those cleaners had negatively impacted his cleaning routine.

“The results were not very noticeable with other products. But with this, you can tell it’s cleaner” -Eric M.

Eric used to clean his shower, “honestly, about every 6 weeks,” when he used other shower cleaners. But now, he has a formal, scrub-free cleaning routine.

Now, Eric cleans his shower once a week because he knows Wet & Forget Shower will keep his shower clean.

And, it is so easy to do. Just spray, rinse, and you’re done!

“The shower has been noticeably shinier and free of the dull film that tends to develop after a while” -Eric M.

With the incredible clean that Wet & Forget provides, he has since recommended the product to his family and friends.

Since discovering Wet & Forget Shower, Eric’s shower has never been cleaner! Now, he can spend more time doing what he loves instead of cleaning his bathroom.

Find Wet & Forget Shower in a store near you with our Store Locator. Or, get it delivered straight to your front steps by Ordering Online.